ICAA – Did IBM Release a Free Version of the Notes Client?

ICAA – Did IBM Release a Free Version of the Notes Client?

ICAA stands for IBM Client Application Access.  This is a standalone client, available for Mac and Windows, that is a stripped down version of the R9 Notes Basic client.   It has been around for awhile, June of 2015 I believe is when it was first released, however it seems to have come in under the radar of most customers and business partners.   Many thought it was simply a re-branding of the Notes browser plugin, which has been around for years now, and is installed by default when you install Notes R9.

If you have not seen ICAA, check out this 1.5 minute video clip.

This IBM announcement letter says that “the IBM® Client Application Access delivers a lightweight solution, enabling you to move to a browser-based interface for email (IBMiNotes®, IBM SmartCloud® Notes® web, or IBM Verse™), while continuing to work with existing Notes and Domino® applications.”

Based on the above ICAA may lend support to the theory that IBM is perhaps looking to retire the Notes client.  If they were to stop selling the Notes client, Verse could provide IBM customers still using Notes for email with an alternative, and ICAA would provide a way of accessing existing applications.  By making Smartcloud a requirement to run ICAA it would encourage customers to move their Notes based applications to the IBM Cloud.   Or maybe it is in fact the Notes Browser Plugin repackaged, and not a key part of the Notes and Domino road map after all.

This 80 ish mb  client is very much a Notes client.  It has a similar look and feel to the R9 Notes client. It even has the traditional Notes Workspace where your applications appear on tabs.  In fact, if you make a copy of your Notes/Data directory, delete Notes, then install ICAA you can have the Workplace appear with your applications similar to what you see with the Notes client, standard or basic varieties. 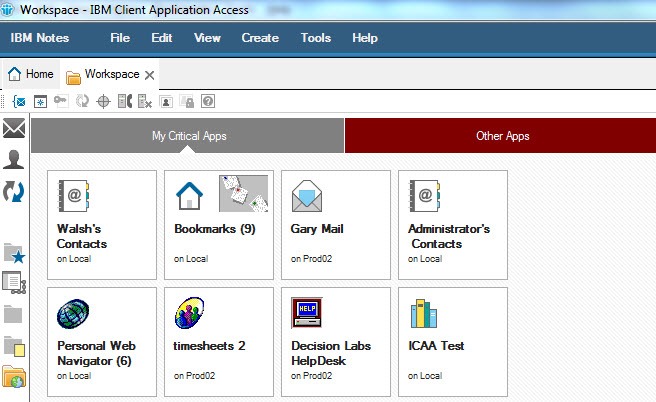 I have accessed a wide variety of Notes applications with ICAA, from simple to complex, and except for not supporting attachment viewing and providing for spellcheck in rich text fields, the applications seem to behave the same as they do when you use the full Notes client.

Below is one of our older commercial DLI applications that has since been retired, the DLI HelpDesk, viewed using ICAA.

What are the license requirements for ICAA? Is ICAA free?  I called the IBM Passport Advantage folks who dug into it more and I was forwarded an email from the Offering Manager for IBM Collaborative Solutions saying that indeed ICAA is a replacement for the Notes Browser Plugin.  It comes free with the Utility servers.

Digging through available documentation I was able to find the following documents to support that:

Although interesting, I do not feel ICAA will impact the downward trajectory of Notes. Even if ICAA provides customers with a free client, Domino is already one of the most affordable application development environments on the market.  Customers are leaving the platform for other reasons. With the Standard Notes Client, The Basic Notes Client,  I think ICAA adds more confusion to the mix.

Keep in mind DOCOVA provides a migration alternative for customers looking to migrate their Notes apps to browser based apps on Domino, or on SQL.  Some will say I am simply feeding the fires to promote self interests when I raise questions about product announcements like ICAA and IBM’s inconsistent messages regarding the road map for Notes and Domino.  The reality is that I feel Domino is a very solid platform, and I would like nothing better for it to be at the heart of every DOCOVA deal we do.  The reality is that the majority of customers are opting for our DOCOVA SQL Edition vs DOCOVA on Domino.   We have been drawn into the migration market due to market conditions, not by choice.