By default, DOCOVA V4.5 is zero footprint. That means that the majority of users who just consume content will NOT have to download any software on their computers.  No browser plugins required, no compatibility view settings, and the full interface will run on most operating systems and devices. That includes Mac, Windows and iPads.  For both existing and new customers, that means applications can be rolled out to more users and faster deployments. DOCOVA V4.5 will ship in the first week of October.

Here are some highlights of the latest version of DOCOVA:

Standards based means DOCOVA is now HTML/JavaScript standards compatible. DOCOVA no longer needs to be run in Compatibility Mode in Internet Explorer. Additionally, this means DOCOVA supports double-byte characters out-of-the-box with no need for the special International version of the Uploader.

Cross-browser means you can use DOCOVA with FF, Chrome, IE, Safari and Opera on computers with Windows 7+ operating systems. Additionally it can be used on Apple OS X with Safari and FF, and Safari on iPad devices.

Zero-footprint means Users can now use DOCOVA without having to install any software to get started.  DOCOVA no longer needs to be run configured in the Trusted Sites list in IE or have the site listing in the compatibility setting. The Uploader/thingFactory/DLExtensions/DOE are not required.

DOCOVA no longer leverages the NPAPI plug-in, nor Google’s newer PPAPI plug-in. DOCOVA’s previously integrated components like the Uploader and thingFactory provided powerful functionalities within DOCOVA. They have now all been implemented through the new optional DOCOVA Plug-in.

If Companies would like to leverage the additional power of DOCOVA for their customized applications, they can install the new DOCOVA Explorer(DOE) Plug-in.

Most noticeably, Users will recognize the new interface changes. Although able to select a theme in previous versions of DOCOVA, the themes are now fully implemented for a more enjoyable and modern user experience.

A new license code model has been implemented. This model uses only one license code vs. three that were used previously for the integrated components.  Note that DOCOVA V4.5 considers anyone who logs into DOCOVA to be a “user”, and all users require a license.

The new license code has four components to it which allows DOCOVA to be implemented through a broader range of licensing options for Customers, fulfilling Customers’ requests to help them ensure they are compliant.

Previous to DOCOVA 4.5, when Users clicked on notification links in their email for items such as workflow, a new browser window is opened causing the need for the User to login to DOCOVA even if they were already logged in. Now, if the User has the DOCOVA Explorer Plugin running with a user name and password credentials saved for an instance of DOCOVA, DOCOVA will automatically detect this and use these credentials to so that the User does not have to login again.

If DOE is not running or user credentials are not saved then the standard login prompt will display in the browser. This feature will simplify user access to documents that are part of a workflow notification or other notification links.

The DOE interface has been changed to make it easier and more effective to use, but its installation is optional.

When the DOCOVA logo button is clicked, Users will be presented with the DOCOVA About dialog. See Figure 4 below. 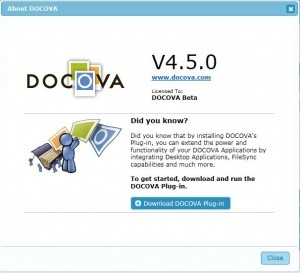 The DOCOVA Plug-in (DOE), is currently only available for computers running Windows 7+.

The DOCOVA About dialog also shows the currently running version of DOCOVA and the Company name that DOCOVA has been licensed to.

The following are a number of new features in DOE.

When DOE is initially launched, Users are presented with the Libraries/Applications, folders and documents for the instance selected, directly in the interface. This new design provides unprecedented fast access and ease of use to Users. See Figure 5 below. 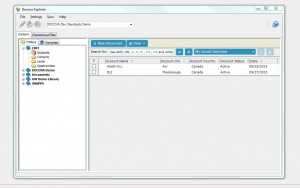 There are now only two tabs, Content and Checked-out Files. The Import, Productivity and Alerts tabs have been removed. See Figure 5 above.

The Content tab contains the Folders tab as it did before, however the Recent tab is now replaced by a Favorites tab.

Users can still create folders/subfolders by right clicking in a folder/subfolder.

When clicking on a folder/subfolder in DOE, Users will now see the default perspective for that folder and all available perspectives rather than just the “Summary” perspective that used to show before. Additionally the full search bar is shown with the User’s saved searches.

Users can create new documents now just like they can in DOCOVA in a browser.

Users can open and edit documents via DOE in the same manner as they can in DOCOVA in a browser.

Dragging and Dropping Files to Documents

Instead of dragging and dropping to an “Import” tab, Users can now create a new document or edit an existing document and drag and drop directly into that new document, from email or from Windows Explorer.

Dragging and Dropping Files to Folders

Users can now drag and drop files from email or Windows Explorer onto a folder. As a User drags a file over the folder structure, it will automatically expand. Upon dropping the file(s), the user will be prompted for the doc type they want to use, which will open the new document and auto-insert the file(s).

When launching an instance in a browser using the Globe icon in DOE, the Users default system browser will be used. For example, if your default browser is set to FireFox, DOCOVA will be launched open in FireFox.

When adding a new instance to DOE, it will no longer happen automatically. Users need to use “Setting – Add Connection” and paste the URL into it and provide their Username and Password. (this is done for security purposes to enable authentication between the DOCOVA browser application and the DOE plugin). See Figure 7 below. 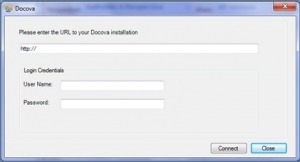 Since Users can now be using DOCOVA with or without the DOCOVA Explorer (DOE) plug-in, there are a couple of new visual indicators in DOCOVA that let the Users know whether or not DOE is running. This is important as there are several advanced functionalities available when DOE is running vs not.

When DOE is running, the indicator is not red and looks like this;

If DOE is running then the attachments Mode will show “Advanced” as shown in the following image;

The new DOE plug-in is NOT backward compatible with previous version of DOE.  However, here are some ways you can run both in the case where you need both DOEs in order to interface with both the new version of DOCOVA and older versions. 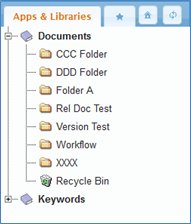 Public File Access is a feature of DOCOVA that allows Users to make files that are contained in DOCOVA, publicly accessible to external Users that do not have access to DOCOVA.

Although not exactly new to DOCOVA, Public File Access has been more tightly integrated with DOCOVA 4.5 by implementing it through the Send Email Notification dialog. If Customers have the Public File Access option enabled, they will see an additional option on the Send Email Notification dialog called “Allow Public Access to File(s)”. See Figure 14 below.

When the new option is selected, Users can select whether a password is required by the Recipient to gain access to the file(s). Users can choose to make all files on the document available, or just a selection of the available files.

Also, an Expiration date can be set in order to only allow public access to the files for a set amount of time.

Upon sending the Notification, Recipients will receive a link to the files where they can safely access them. 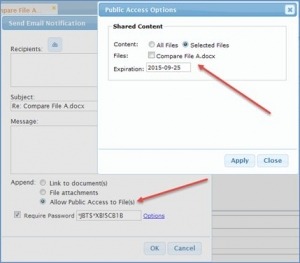 When clicking on a Library/Application (not a folder), DOCOVA now presents the User with a library reporting view which is a general document information summary showing a document’s folder, subject/title, modified on date and modified by column. See Figure 15 below.

Users can also click on the Folder column link to go directly to a folder of interest, or click on the Subject link to open the document.

Since DOCOVA 4.5 has been standardized, previously integration components have been removed, like thingFactory and the Uploader. This means that if Customers have implemented customizations using the components, they will need to be changed.

To facilitate this change, DOCOVA has implemented the aforementioned APIs that will help make transitioning faster and easier. Additionally, DOCOVA 4.5 has implemented styles that can be leveraged as well as the jQuery JavaScript libary.